What Really Ails Us?

Part I – Failure to Rescue and Errors of Omission

The problem of patients developing complications during hospitalization and suffering morbidity and mortality as a consequence has always been present. But recently, intense attention has been focused on this phenomenon, as it is the primary cause of preventable hospital mortality.

To solve the problem, patient care staffing is being looked at as a contributor, and technology systems to intervene earlier are being developed and implemented. Furthermore, the issue has acquired an official name, “Failure to Rescue from Complications,” and a precise definition from the Agency for Healthcare Research and Quality (see AHRQ’s Guide to Patient Safety Indicators at www.qualityindicators.ahrq.gov). Indeed, failure to rescue is now viewed as an important patient safety indicator.

The HealthGrades Quality Study, Patient Safety in American Hospitals (July 2004), highlights the frequency of patients dying from complications that develop while in hospitals. Failure to rescue, according to the three-year study, accounts for 60,000 deaths each year in Medicare patients under the age of 75. While this statistic alone should make us take notice, the study really understates the problem by only looking at deaths — not patients who almost died, which involves its own set of morbidity, expenses, and familial stress.

Bellomo et al. (2004) highlight the immense impact of rapid response teams. For example, staff members set up a protocol whereby if a patient exhibits a variance outside a predetermined limit, such as respiratory or heart rate triggers, a medical emergency team would be automatically called to evaluate the patient. This rapid response team approach brought about a drop in hospital mortality.

Spurred on by these types of findings and others, the Institute for Healthcare Improvement (IHI) announced the 100,000 Lives Campaign, which aims to enlist hospitals across the country in a commitment to implement changes in care that have been proven to prevent avoidable deaths. One of the six interventions is deploying rapid response teams.

This renewed and reinvigorated focus on failure to rescue holds much promise for improving patient safety. Based on my experience as a pulmonary and critical care physician, I believe that recent statistics only quantify a long-standing problem. Deaths from complications of illness or care during a hospital stay happen more than we’d like to admit. To improve the hospital’s overall mortality statistics, a good place to focus is on preventable mortality, which usually involves patients outside the ICU who are deteriorating clinically.

There are many reasons why failure to rescue has been an enduring problem and examining its root causes will help us find effective solutions.

Reasons for Failure to Rescue
Determining the cause of hospital errors that lead to harm has already been put under a microscope. One such study, To Err Is Human, the landmark Institute of Medicine report released in 1999, successfully highlighted the enormous problem of patient safety. But since the report emphasized blatant errors that had been carefully documented in published studies, it naturally focused on errors of commission, such as medication errors.

Medication errors have received much attention in the literature, and consequently these errors received special prominence in the report. Given that perspective, the industry leapt to the conclusion, pressed by other powerful forces, that implementation of CPOE and barcode medication administration tools was the place to start solving the problem of patient safety. While CPOE and barcode medication administration tools can help reduce medication errors, they don’t address other important systemic issues.

Errors of omission, on the other hand, are errors that occur as a result of a step not taken or when an appropriate step is left out from a process. The traditional use of the phrase has referred to the omission of a diagnostic test, such as routine mammography at a certain age or failure to administer a form of prophylaxis or therapy, such as giving aspirin to a patient with a strong indication, such as an acute heart attack.

Yet, other deficiencies in care also represent errors of omission. Consider this scenario: a doctor making rounds can’t find the clipboard with the vital signs and as a result, doesn’t know that the patient had a fever the night before. That night an even higher fever spike occurs — the infection has now been untreated for another day — and the patient goes into septic shock, which might have been avoided if the patient had received prompt therapy.

Most clinicians would accept that this was not optimal care, but it wasn’t an error of commission, so what was it? I would argue that the unavailability of patient information for decision-making represents a systematic error of omission.

Another example of an error of omission would be the not uncommon circumstance when a patient’s vital signs indicate decompensation, but the clinical response is inadequate or delayed. Literature shows that in about 50% of codes, evidence of clinical worsening was present for many hours.

Why have these errors been overlooked for so long? One reason is that they are often invisible and hard to recognize, in large part because they are viewed as inherent characteristics of our systems of care. To clarify whether it is just a “sub-optimal system” or an “error,” consider your personal reaction if the above scenarios involved a bad outcome for a loved one. Most people quickly respond, “it’s an error, and we should fix the system.”

With errors of commission, an individual is usually closely associated with the problem, even when the real issue is a system failure. With errors of omission, many people might have dealt with the issue, but didn’t solve it appropriately, so it seems more like a system problem.

If we are to succeed in rescuing patients from complications, we need to intervene earlier. In my 20 years as a pulmonologist/intensivist, I was commonly called to see patients who were either coding or about to code. After looking through the patient chart, I would regularly find clear signs over the past four to six hours indicating clinical decline. Why wasn’t needed assistance called in earlier?

First, we lack a systematic way to handle clinical decompensation. While we have “code” teams, their efforts often come into play too late; hence the need for rapid response teams. Second, we need a systematic way to recognize that there is a problem. We can’t get the performance levels that patients need by relying on a paper medical record.

Getting Rid of the Paper Dinosaur
The basic, first step is to replace the inherently unreliable paper patient chart. Paper charts provide information in a disjointed manner, with medications on one page and the effects of the medications in another location — not to mention that paper charts get misplaced, information is sometimes missing and/or illegible, and paper records aren’t effective for identifying clinical trends.

Hospitals need to put patient data such as vital signs, fluids, and medication usage into electronic form. Then, it is easy to determine a patient’s status and check up on patients even when not physically near them. It also enables staff to recognize when changes in patient location and care are needed as their situation changes or worsens. 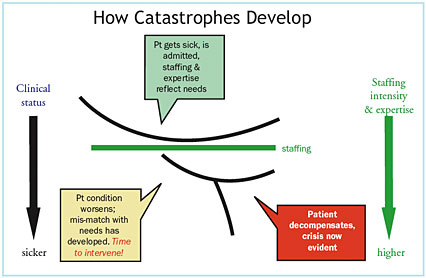 Patients are admitted and assigned to a unit based on the prognosis and treatment upon admission. Staffing and expertise also reflect patient needs when admitted. However, even with the best care, clinical needs often change after admission. A perfect assessment earlier in the day can quickly become dated. Relying on a paper chart makes it difficult for signs of clinical deterioration to come to the attention of those who can deal with the issue.

As a matter of fact, the first time physicians often become aware of a problem is when they receive a frantic call to come to the bedside. The patient is decompensating and needs immediate, dramatic intervention to save his life. Again, the signs were there, and if we take the time to look back at the patient chart and “connect the dots,” we see that instability had been developing for hours before an urgent summons for assistance.

Supervisors Identify Trouble Spots
Traditionally, electronic tools have been directed at hands-on caregivers, and this is completely appropriate as the first step in enhancing care. However, to achieve better outcomes, we need to electronically enable rapid response teams and supervisorial staff.

Indeed, clinical supervisors and charge nurses are responsible for focusing on a group of patients, managing resources across floors or units and finding the exceptions, or patients that need extra care. As a result, they can provide an additional safety net — if they have the tools to do so effectively.

Today, finding patients in need of help is done by walking around and looking for signs of trouble, asking caregivers if they need help, or responding to a page or phone call that says “I’m in trouble.” This is terribly inefficient and — based on failure to rescue statistics — an ineffective way to find decompensating patients.

Technology’s Role in Improving Patient Safety
There are a variety of strategies that hospitals can implement to save more lives. Clearly at the top of the list are a rapid response team and effective technology tools in the hands of supervisors. By tapping into a clinical information system that stores all patient data in one place, supervisory staff and rapid response teams can begin to effectively find patients in clinical decline and bring in the necessary staffing, as needed.

In Part II (coming in the Sept./Oct. issue of Patient Safety and Quality Healthcare), I will take a closer look at a new wave of patient monitoring tools and technologies that form the underpinnings of an effective rapid response team.

Richard Kremsdorf (richk@clinicomp.com) is CEO and president of CliniComp International in San Diego, California, which develops clinician documentation systems for hospitals, integrated delivery networks, academic medical centers and other acute care providers. Formerly, Kremsdorf served as vice president, clinical information systems, at Catholic Healthcare West, a 48-hospital system, and as medical director of clinical information systems at ScrippsHealth. Most recently, he was CEO of Five Rights Consulting. He is an experienced speaker and educator and wrote the landmark publication Medication Safety Tools 2001-3, which defined the essential capabilities of CPOE and electronic medication administration. Kremsdorf is a graduate of Massachusetts Institute of Technology and Albert Einstein College of Medicine and serves as a member of the Editorial Advisory Board for Patient Safety and Quality Healthcare.