A 28-year-old woman visits my practice, suffering from bleeding fibroids. At times, she is changing a pad every 10 minutes, which leaves her frazzled and exhausted. She has been forced to skip several days of work per month for nearly half a year—and she’s a contract worker, so this means missed pay. For close to a year, she has tried a multitude of approaches to reduce the effects of her fibroids: hormone therapy, IUD intervention, and scan after scan. She is desperate to get back to her life and her job she loves, interpreting medical procedures for patients who are deaf.

I know that the best thing for this woman, who hopes for a good five- to seven-year childbearing window, is myomectomy (i.e., removal of the fibroids while leaving the uterus intact) via minimally invasive procedures. This is because minimally invasive surgery, from a safety perspective, has been shown to result in shorter hospital stays, faster healing times, and cosmetic benefits associated with less significant scarring. In terms of patient safety, it’s a better bet than open surgery.

But I am an unusual doctor today in my willingness to consider minimally invasive procedures for myomectomy and hysterectomy. Some hospital administrators are not allowing its use. Why? It’s because of a black box warning on the morcellators that are used to break up fibroid tissue.

At times, developments occur that call the safety of a medical device into question. This is true of the power morcellator, a device that breaks uterine tissue into smaller parts so that they can be removed via laparoscopic incisions. After patient reports of cancer spread by power morcellation, the FDA conducted a formal review and investigation and subsequently placed a safety warning on power morcellators, discouraging their use. Although the black box warning was limited to a select group of women of advancing age and/or with uterine fibroids that may be suspected of containing cancer cells, hospitals and physicians immediately began erring on the side of conservative treatment plans and skipping morcellation altogether.

And yet, here is my patient, anxious for a solution, wishing for an end to the constant bleeding. “Most doctors I’ve spoken to recommend open surgery with a C-section incision, because of the size and complexity of the surgery,” she says, her face pulling into a worried frown. She and I look at the images from the latest scans. Her uterus is three times the normal size. One of her fibroids is the size of a grapefruit and growing. Should we just go with open surgery? If we choose minimally invasive, we have no choice but to morcellate. These fibroids won’t come out otherwise.

Further complicating the patient safety landscape were the recent findings of the FDA investigation. Investigators discovered that an unexpected cancer found at the time of benign uterine surgery might be more common than previously understood. During surgery intended to remove benign fibroids, the FDA now estimates that there is a one-in-360 chance of finding an unsuspected uterine sarcoma and a one-in-750 chance of a leiomyosarcoma, which is an especially aggressive form of uterine cancer. Its previous estimations had been about the same for uterine sarcoma, but were quite a bit lower for leiomyosarcoma, at estimates of one in 498 in 2014.

But there’s a reason my take on the situation is unique among physicians. At the point of the black box warning, I had been working for years with a team of experts and product designers to develop a technique to capture tissue fragments during fibroid surgery. I had always been bothered by the recurrence of fibroids after surgery and knew that, with insufflation, it was practical (and roomy enough in the abdomen) to introduce a device that would contain tissue fragments and prevent them from dispersing. My goal in developing this containment device was to capture all of the tissue, cells, and fluids during this process and preserve the ability to perform the procedure laparoscopically for patients, along with the benefits of the laparoscopic approach.

One of my facility’s OR nurses described the situation vividly after first witnessing a surgery using the containment bag: “All that stuff dripping and melting off inside of the body, onto other parts of the anatomy—now that I’ve seen all of that captured in the bag and removed, I don’t how anyone would ever want to go without the bag.”

I’d have to agree with her. And leading electrosurgical device companies like Olympus have made additional improvements, even following the black box warning against morcellation. The Olympus PK Morcellator, which uses electrosurgical energy to break up fibroids and is only sold with the PneumoLiner containment bag, is now designed to peel around the surface of tissue, which prohibits “coring” of the tissue. This ensures that the doctor can always see the tip of the device and have control during the procedure, an important patient safety advancement. 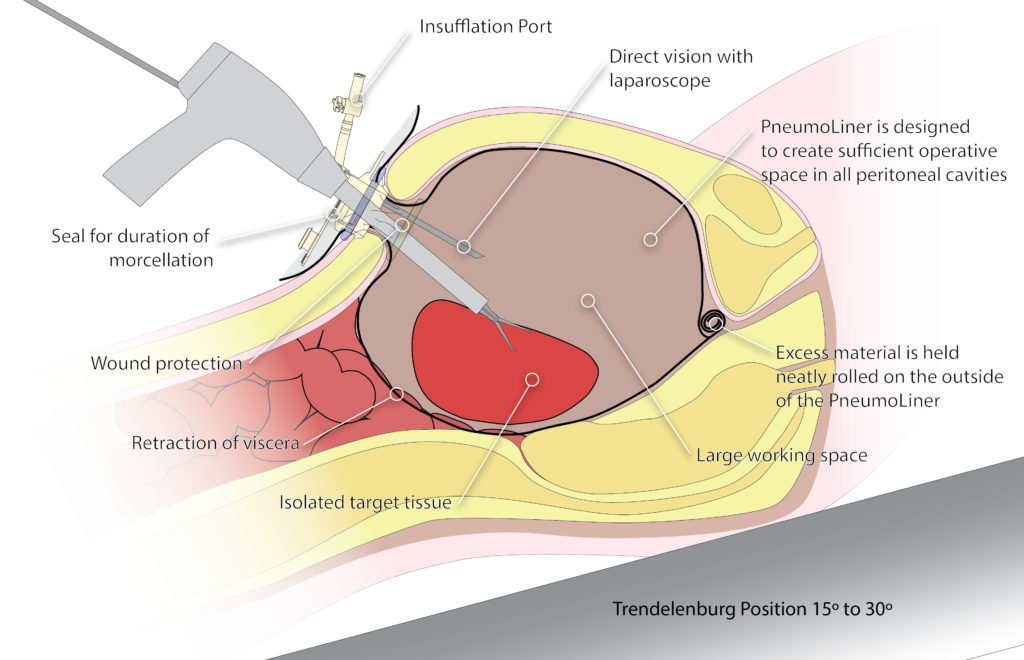 “What would you do if it was your wife or doctor?” my patient asks. I think about a recent article about a new research study—one that bore out what I had hypothesized would happen from the moment the black box warning was issued. The reduction in morcellations since the warning, from a peak usage during minimally invasive hysterectomies at 13.7% in the fourth quarter of 2013 to 2.8% in the first quarter of 2015 (In the Journals Plus, 2016), was giving way to an increase in complications.

With more women forced to have an open hysterectomy because of morcellation concerns, according to a JAMA Surgery report (Multinu et al., 2018), complications are on the rise, some minor and others major. It was also reported in another study (Harris et al., 2016) that with a 4.1% drop in the laparoscopic hysterectomy rate, a 27% increase in major, non-transfusion-related surgical complications was shown; in addition, hospital readmissions within 30 days increased more than 23% (from 3.4% to 4.2%), leading to an additional $23 million in healthcare costs in an eight-month period following the FDA warning. The median cost of readmission was $5,847.

This new research seems to hold an important lesson. In attempting to reduce the spread of cancer through reduced minimally invasive options for women, we must be mindful that we may increase their surgical risks, violating the guiding principle of “do no harm.”

I feel confident that laparoscopic hysterectomy and myomectomy can get back on track, even for larger fibroids. In this way, the black box warning may well have a positive effect on patient safety. It does, after all, demand manufacturers and the FDA to innovate toward a viable solution. I’m feeling more confident in the Contained Tissue Extraction System (combining the PneumoLiner containment device and the PK Morcellator), provided that surgeons ensure proper patient screening and limit the system’s use to cases where no risk of cancer is suspected.

Let’s do this the right way, I tell my patient. We will pursue a minimally invasive surgery using the Contained Tissue Extraction System. She gives me a relieved smile—more than anything, she wants to get on with her life.

Over the next two months, this patient’s minimally invasive journey will actually require two surgeries, because one tumor is so distant from the others that it necessitates separate point of entry to the uterus.

But another important development has arisen. In June 2018, the American Association of Gynecologic Laparoscopists (AAGL) task force included containment in its recommendations, suggesting that, in addition to a more detailed preoperative screening process, the use of a containment system may further mitigate risk (AAGL, 2018).

The true-to-life benefits of innovation

Today Olympus is the only medical device company to offer an FDA-cleared containment system. But as the hazards of open surgery make themselves increasingly apparent, other medical device providers will likely follow. And physicians will likely return to their laparoscopic equipment. The black box warning was an important wake-up call, but we shouldn’t forget the important benefits that minimally invasive innovations have yielded for us.

My patient’s second surgery gives us the opportunity to see how thoroughly and impressively her uterus had healed since the first surgery—and although I can’t prove it, I’d bet that the avoidance of open surgery gave her body what it needed for the fastest possible healing. Overall, her story ends with good news. She is doing very well, and while her fibroids have shown some sign of return, they seem to be on a slow track that may give her a good window of quality of life and fertility.

Also, remember our OR nurse, who provided the graphic “dripping and melting” commentary? She recently needed a hysterectomy, also because of benign fibroids. She says that she couldn’t have imagined a safer route than contained tissue extraction.

“Now that I’ve seen hundreds of contained hysterectomies versus hundreds more without containment, I just don’t know how you would ever choose uncontained,” she told me. “All that potential pathology dripping onto the other organs and tissue—maybe causing inflammation of the liver or bowel. All the fat and smoke that can be contained with the simple addition of the bag to eliminate exposure. I’m so pleased I had a sneak peek at this advancement. I know it was the right choice. I was back to work nine days later, and I felt great.”

Thanks to some activist patients, a black box warning, and new innovations in tissue containment, more women are able to go the route that makes the most sense to them.

Do not use on tissue that is known or suspected to contain malignancy. Do not use for removal of uterine tissue containing suspected fibroids in patients who are: peri- or post-menopausal; or candidates for en bloc tissue removal, for example, through the vagina or via a mini-laparotomy incision. Do not use in women with undiagnosed uterine bleeding. Do not use this device on patients with known or suspected allergies to polyurethane. Do not use where the abdominal wall thickness is larger than 10cm. This device should only be used by physicians who have completed the formal validated training program administered by Olympus and/or Advanced Surgical Concepts.

WARNING: Information regarding the potential risks of a procedure with this device should be shared with patients. Uterine tissue may contain unsuspected cancer. The use of laparoscopic power morcellators during fibroid surgery may spread cancer. The use of this containment system has not been clinically demonstrated to reduce this risk.

WARNING: Uterine tissue may contain unsuspected cancer. The use of laparoscopic power morcellators during fibroid surgery may spread cancer, and decrease the long-term survival of patients. This information should be shared with patients when considering surgery with the use of these devices.

The use of the electrosurgical generator ESG-400 is contraindicated when, in the judgment of the physician, bipolar electrosurgical procedures with the PK Morcellator would be contrary to the best interests of the patient or user. For patients with active electronic devices implanted, refer to the instructions for use for those devices before using bipolar electrosurgery. The PK Morcellator should not be used if the patient is not considered suitable for a laparoscopic hysterectomy procedure or a laparoscopic myomectomy procedure.