When he was designing video games for gaming company Activision some years ago, if you told Justin Barad, MD, that he’d be helping surgeons get better at what they do, he might have brushed you off.

It took a family member’s struggle with an autoimmune disease that inspired him to go to medical school as well as a desire to invent technology, but today his company is designing virtual reality (VR) training tools that are helping surgeons do their jobs better.

Today, he’s co-founder and CEO of Osso VR, as well as a board-eligible orthopedic surgeon with a bioengineering degree from UC Berkeley and an MD from UCLA.

It’s widely understood that vital teaching opportunities come from students learning their craft by operating on real patients, and that practicing surgeons become masterful by operating on even more patients throughout their career. 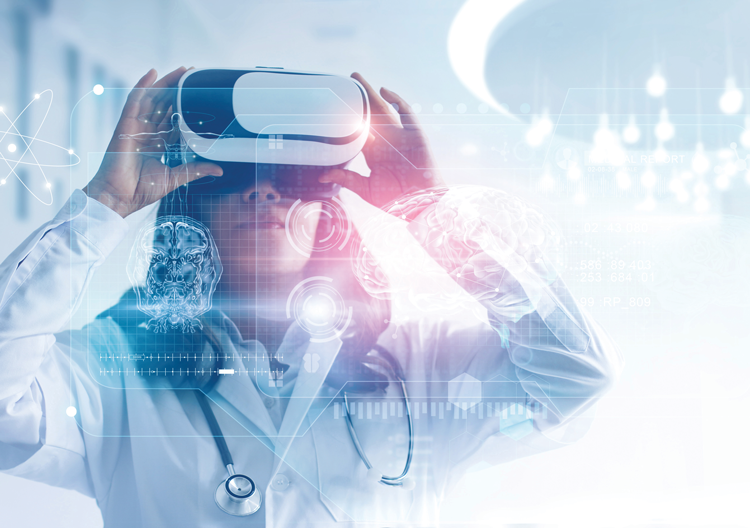 What may come as a surprise to some, however, especially to those not in the industry, is how little surgeons get to practice their craft when they aren’t actually operating on a patient.

“The problem is simple math,” says Barad. “There’s too much to learn, too little time, and every year different techniques come out, including new software, which is a new skill for many health professionals. There’s no good way to scalably train to do the same things every time and assess how they are ready to do it.”

Now, imagine a world where surgeons and their teams could practice a surgical procedure using VR software. It’s apparently here, and Osso claims to train approximately 1,000 surgeons a month using not much more than a headset that looks like a pair of goggles and two handheld controllers.

“We use the Osso VR system at our institution; it is set up in our surgical simulation training lab,” says Michael Ast, MD, an orthopedic surgeon at the Hospital for Special Surgery in NYC and an assistant professor of orthopedic surgery at Weill Cornell Medical College. “Our residents and fellows have access to this lab at all times and are free to use the system whenever is most convenient. We also encourage our residents and fellows to use specific modules within the system prior to starting individual surgical rotations to help and prepare for those operating room experiences.”

It makes sense. A surgeon may be very proficient in general, but consider any individual surgical operation, such as a hip replacement or heart valve procedure. Unless that surgeon specializes in only that one procedure, how many times does he or she actually get to practice becoming proficient at the real thing?

The answer may surprise you. Once upon a time, surgeons only needed to perform a procedure 10–20 times to reach proficiency. Things have gotten much more complex, and that number has grown to 50 to 100 cases. A 2017 University of Michigan study found that up to 30% of graduating general surgery residents are unable to operate independently.

According to Barad, a surgeon needs to perform a procedure up to 100 times before being judged as proficient on some of today’s more complicated surgeries, especially those that utilize robotics or invasive procedures.

Barad says that traditionally, when a new medical device or procedure is introduced, manufacturers will hold training sessions. In his experience, he’s seen hotel ballrooms turned into cadaver labs (with real dead bodies), and hospitals will fly their surgeons out to get some training time before bringing new devices into the surgical suite.

“We do a run through once or twice on a cadaver, and now there’s a big gap,” he says. “It can be six months after doing a procedure [on a cadaver] once, and something can go horribly wrong.”

In addition, he says it’s not feasible for hospitals to include everyone in the training, such as nurses, anesthesiologists, and other assistants who may benefit from learning about the intricate details of a surgical procedure in order to facilitate a positive outcome.

There are no real tools on the market to assess a surgeon’s surgical skills, and that assessment can be crucial because, like any motor skill, surgical skills can falter with age and disuse, says Barad.

In his own experience with five years of surgical residency and one year of fellowship (as well as a residency at UCLA and a fellowship in pediatric orthopedics at Harvard and Boston Children’s Hospital), Barad says he’s actually had his skills assessed by his superiors watching him play the board game “Operation” during an interview.

“The main problem is there’s no tool to assess in an objective manner,” he says. “For some, it’s one-time training for something you have to do many times.”

The benefits of using VR for surgeon training are impressive, and the system is easy enough to be used by a surgeon on a lunch break.

The person using the system enters the procedure he or she is trying to learn or practice, then preloaded software helps simulate that procedure. The VR system can walk a student through the procedure step-by-step; it can even break down complicated procedures into individual tasks, such as placing a pin accurately, and then offer criticism or advice on how to be more efficient while assessing the user’s skills.

“You could run through a full technique in 40 or 50 minutes, and like a book, break it down by chapter if you’re in a rush,” Barad says. “When I was in my residency, I never got to eat lunch, and it was amazing if I got to use the bathroom. You have to be aware of people’s time constraints.”

Barad likens the level of training provided by the system to a concert pianist asked to sight-read a piano score: In a pinch, he or she could get through it, but more practice would result in more proficiency. Also, in the aviation industry, pilots get chances to practice in simulators, leading to the industry being among the safest on the planet. He thinks VR could similarly make medicine that much safer.

Osso VR is not the only company out there exploring the possibilities of VR in surgical training, and as the technology gets more reliable and cheaper to acquire, it’s almost a given that other companies will jump into the mix. For instance, Johnson & Johnson has spent millions on an initiative it began in 2017 to establish 24 surgical training centers worldwide, a few of which have VR.

Though off-the-shelf VR hardware such as the Oculus Rift® and Microsoft’s HoloLens® headsets are becoming cheaper, it’s still expensive to integrate VR with the necessary software that translates conventional medical images into 3D. According to some reports, Johnson & Johnson’s VR product (using Osso’s technology) costs nearly $10,000 per unit on average. Stanford’s Neurosurgical Simulation Center, funded by its parent hospital and outside donors, cost almost $750,000.

“The biggest benefit of VR training is that our surgeons-in-training can gain more exposure to the surgical procedures by spending time using VR outside of the operating room,” says Ast. “Getting the additional opportunities to practice through the steps of the surgical procedure and instrumentation can enable them to feel more comfortable when they are in the actual surgical setting. It also allows them to spend their time in the operating room truly learning the advanced techniques and surgical pearls from the teaching surgeon because they have already become familiar with the basic surgical steps.”

So, if your hospital is looking to get involved in VR training, how do you obtain administration buy-in?

“The biggest piece of advice would be to implement the training as early as possible,” says Ast. “It’s also useful to start off by identifying each individual program’s areas that warrant particular improvement, so that that the program can concentrate its initial VR training to address these specific areas. This makes it easiest to identify improvement from the VR implementation. In terms of buy-in from administrators, I think once a training program can identify weaker areas, most administrators would see the implementation of this type of simple technology as extremely beneficial to improve their overall training program.” *