Virtual reality (VR) is a virtual and technological environment with scenes and objects that simulate reality for the user. Glasses or a VR helmet can immerse the person visually and sensorially in a multitude of environments, including ones centered around health and disease.

The concept of VR started in the 1960s with Ivan Sutherland, who “attempted to describe VR as a window through which a user perceives the virtual world as if [it] looked, felt, sounded real and in which the user could act realistically” (Cipresso et al., 2018).

Sutherland (1968) explains that “the fundamental idea behind the three-dimensional display is to present the user with a perspective image which changes as he moves. … [I]f we can place suitable two-dimensional images on the observer’s retinas, we can create the illusion that he is seeing a three-dimensional object.”

VR allows the participant to be a character in the scene that is viewed through the glasses or helmet. Initially, VR technology was used exclusively for entertainment purposes (Li et al., 2011). However, in recent years, its use has expanded into a variety of clinical areas, including pain management, physical rehabilitation, and treatment of psychiatric disorders (e.g., phobias, post-traumatic stress disorder, and anxiety disorder).

Li and colleagues (2011) also refer to the study of VR’s application in medical environments as a means of attenuating pain perception, anxiety, and general distress during painful medical procedures, such as wound treatment, chemotherapy, and dental procedures, as well as routine medical procedures. VR is also used to improve the quality of life of patients with Parkinson’s disease and other neurological conditions.

Technologies such as VR open innovative paths to improve the well-being of patients, as well as help health professionals who need to quickly expand their knowledge to work in the various fields of health. Pain control and knowledge are key ingredients of this technological open door that is increasingly occupying more territory in hospital organizations.

We identified and analyzed a set of relevant articles specifically associated with VR interventions in hospitals, through electronic research from the Cochrane Library, MEDLINE, as well as electronic platforms of American and English hospitals and manual searches through reference bases. 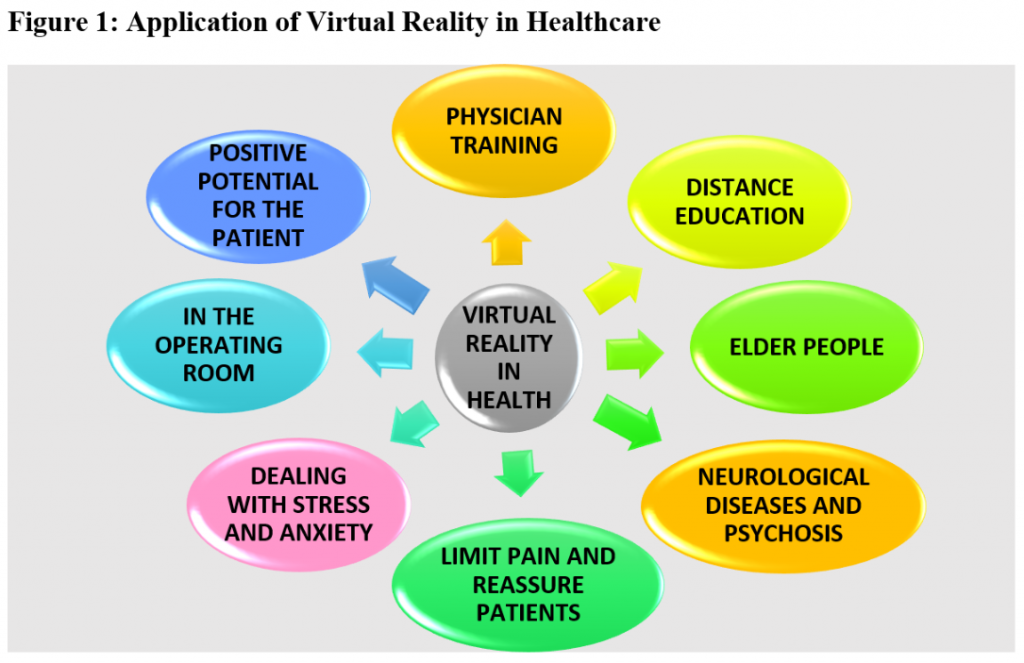 Stanford Medicine is using a new system that combines MRI, CT scans, and angiograms to create a 3D model that both doctors and patients can see and manipulate as a VR game (Erickson, 2017).

For residents, the class is taught in a room where doctors are surrounded by three huge screens. In reclining chairs with drink holders, professionals start their comfortable journey inside the human skull. After residents put the VR devices on, the instructor, who emerges as an avatar in a white coat, directs them to the patient’s brain (Erickson, 2017).

The different components of the brain arise before the viewers, displaying arteries that show an aneurysm, bones that exhibit pathologies of the skull, or tissues where a tumor is present (Erickson, 2017). At the same time, physicians can rotate the images and review them in detail for a thorough view.

To show patients what happens inside their heads at Stanford Medicine, patients are guided through a visualization of their organs, even in the hospital room. The fact that they can see the problem in three dimensions reassures patients; this is especially useful for young patients or those who are not proficient in English (Erickson, 2017).

Doctors can also record the images on a pen drive and give it to the patient as a souvenir (Erickson, 2017).

Although traditionally, doctors can show patients a standard physical model of the brain or spine and point out their location, with VR, “we are able to immerse patients in their own anatomy, so they can very clearly get a sense of what’s going on,” notes VR program lead Malie Collins (Erickson, 2017).

VR can also be used to guide surgeons in a 3D simulation.

In the Stanford Neurosurgical Simulation Lab, surgeons practice on images of the real patient instead of a generic brain, allowing them to map an upcoming surgery in advance. Anand Veeravagu, MD, one of the neurosurgeons at Stanford Medicine, states that it is “a window into the brain of the particular patient we’re going to operate on” (Erickson, 2017).

This simulation process, with the actual 3D image of the organ, facilitates the training of surgeons in addition to improving the accuracy of the surgery. It also increases patient safety as it aims to produce safer procedures.

Neurosurgeon Gary Steinberg, as quoted in Erickson (2017), states that it is possible to “plan out how we can approach a tumor and avoid critical areas like the motor cortex or the sensory areas” through the ability to reconstruct it in 3D.

VR enables a patient with Parkinson’s disease to perform repetitive motor tasks, simultaneously stimulating motor and cognitive processes. VR offers patients with neurological deficits an opportunity to develop new motor strategies or to relearn motor skills that have been lost due to injury or during their disease process (Dockx et al., 2016).

Dockx et al. (2016) conducted an extensive literature review of eight studies involving 263 patients. The results indicated that VR interventions can lead to greater improvements in both step and stride length (movement), compared to interventions performed by physiotherapy, and there was evidence that improvements in gait, balance, and quality of life were similar to those found in active control interventions.

According to Freeman (2008), VR “holds great promise in furthering the understanding and treatment of psychosis.” Freeman says that the use of VR allows researchers to control one of the key variables in understanding psychosis—social environments—providing exciting applications to research and treatment. There are seven applications of virtual social environments to schizophrenia: 1) symptom assessment; 2) identification of symptom markers; 3) establishment of predictive factors; 4) tests of putative causal factors; 5) investigation of the differential prediction of symptoms; 6) determination of toxic elements in the environment; and 7) development of treatment.

Researchers Li, Montaño, Chen, and Gold (2011) found that VR has been used to manage pain and distress associated with a variety of painful medical procedures. These researchers verified that in both clinical and experimental studies, participants in VR experienced reduced levels of pain, anguish, or general displeasure and reported the desire to use VR again during painful medical procedures.

VR can act as a non-pharmacological form of analgesia, acting on a series of emotional, affective, cognitive, and attention-based processes based on emotion (Li et al., 2011).

Also, a hospital in Los Angeles used VR to distract patients’ attention from pain. Positive results showed a reduction in suffering of up to 24%. Putting patients in pleasant situations, such as relaxing places or by introducing interactive games, allows them to “momentarily forget” their situation, allowing physicians to conduct more invasive treatments. VR could also be used when treating serious burn wounds or administering vaccines to young children.

In addition to distraction, there are studies that show the ability of VR to block pain receptors (Li et al., 2011).

The ability to present mild, fun, and relaxing activities gives VR the potential to reduce anxiety and stress, being able to intervene in breathing, meditation, and stress management for a person who might otherwise experience anguish and pain.

Freeman et al. (2017) confirm that “VR exposure-based treatments can reduce anxiety disorders, but there are numerous research and treatment avenues of promise.” They note, “The treatment possibilities will only be realized if the immersive VR technology is combined with targeted translational interventions.” They believe that the simulation of reality through VR could increase access to psychological therapies, while treatment outcomes could be enhanced by the technology’s ability to create new realities.

The Institute of Neurosciences (IN) of the University of Barcelona (2020) offers 30-minute sessions to patients with stress and anxiety. The IN developed a self-help VR protocol called COVID Feel Good that helps people overcome the psychological burden of tensions caused by COVID-19 by reducing their levels of stress and anxiety. This service is free, requiring only a mobile phone with the YouTube application and VR glasses like Google Cardboard. The protocol consists of watching a 10-minute video called “The Secret Garden,” in which the person follows a series of exercises. The video is viewed at least once daily for a week, with specific goals for each day of the week.

Treviranus (1998) reported more than two decades ago that devices that display haptic information, which involves touch and movement, can improve learning. These antecedents of VR allowed users, using their own hands and fingers, to virtually “touch” the objects presented on computer screens as if they were real physical objects. Computer graphics included in the haptic vision created the illusion of touching an object virtually.

We know that skills—that is, the construct that integrates knowledge, capacity, and attributes—develop when knowledge joins action (Tench & Konczos, 2013; OECD, 2005). More than information, knowledge requires more from the user, but prepares the user better for the following tasks. Individual empowerment allows individuals to take control over their will and make better health decisions (Sørensen et al., 2012).

Sense-Garden is a psychosocial intervention that is being developed to create individualized reminiscence sessions for people living with dementia in residential care. The intervention combines the use of technology for memory and multisensory stimulation, with human-to-human informational and emotional communication (Goodall et al., 2019). The key concept of Sense-Garden is creating an environment in which the person with dementia is the central focus.

The Sense-Garden research resulted in the formation of six themes: 1) benefits for all; 2) focus on the individual; 3) past and present; 4) emotional stimulation; 5) shared experiences; and 6) challenges to consider. This research provides important theoretical considerations for the role of technology in not only the Sense-Garden intervention, but in preserving the identities of people with dementia and providing opportunities for connection with others.

Institute of Neurosciences (2020). Virtual reality to reduce stress and anxiety levels caused by the lockdown, University of Barcelona. http://www.neurociencies.ub.edu/virtual-reality-to-reduce-stress-and-anxiety-levels-caused-by-the-lockdown/

Organisation for Economic Co-operation and Development (2005). Definition and selection of key competencies (DeSeCo). Retrieved from https://www.oecd.org/education/skills-beyond-school/definitionandselectionofcompetenciesdeseco.htm