By the Institute of Safe Medication Practices

Problem: In May 2018, ISMP held its second national summit on smart infusion pumps. The first summit, held in 2008, examined smart pump implementation, drug libraries, and clinical practice, and resulted in publication of the ISMP Guidelines for Safe Implementation and Use of Smart Infusion Pumps in 2009. Since then, smart pump technology has evolved, and its application has spread to nearly all U.S. hospitals. During our latest summit, we focused on optimizing use of the technology during administration of secondary and intermittent infusions, patient-controlled analgesia (PCA), epidural infusions, plain IV solutions, and perioperative/anesthesia medications; preparing for pump-electronic health record (EHR) interoperability; and library analytics. 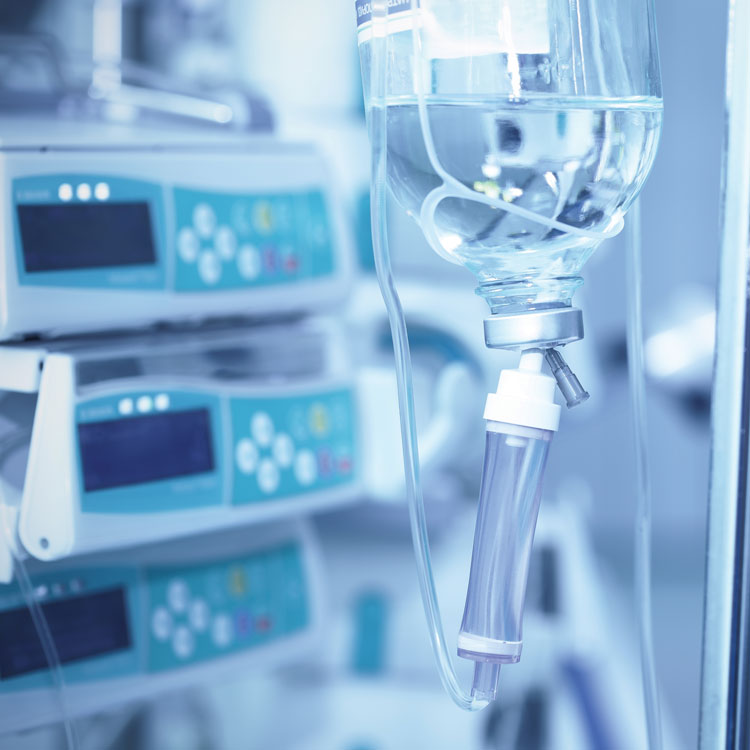 An infusion of IV furosemide 10 mg/hour was prescribed. When programming the smart pump, a nurse selected the custom concentration option and then accidentally entered the concentration as 10 mg/100 mL (0.1 mg/mL) instead of the intended 100 mg/100 mL (1 mg/mL). The pump had a soft low concentration limit set at 0.2 mg/mL, so a soft alert was issued. The nurse bypassed the alert, and the entire bag containing 100 mg of furosemide infused in 1 hour instead of 10 hours. Fortunately, the patient was not harmed.

Milrinone IV was prescribed to infuse at 2.5 mg/hour. The pharmacy dispensed a 20 mg/100 mL (0.2 mg/mL) milrinone infusion bag. Using the custom concentration option, a nurse set the concentration as 0.2 mg/100 mL. The entire bag containing 20 mg infused in a matter of minutes instead of infusing over 8 hours. The patient required a bolus of IV fluids to treat hypotension, but no changes in the patient’s heart rhythm were reported.

A physician prescribed IV insulin (regular) 12.5 units/hour for a patient with hyperglycemia. A standard insulin infusion of 100 units/100 mL (1 unit/mL) was dispensed from the pharmacy. When programming the pump, the nurse failed to select the standard insulin concentration and instead used the custom concentration option to enter an erroneous concentration of 5 units/100 mL (0.05 units/mL). The pump infused the drug at a rate of 250 mL/hour. The entire bag containing 100 units of insulin infused in approximately 20 minutes. The patient’s outcome was not reported.

A physician prescribed morphine PCA for an opioid-tolerant patient with a demand dose of 1.5 mg, a lockout of 10 minutes, and a basal rate of 1.5 mg/hour. The pharmacy dispensed a 60 mL syringe of morphine 55 mg/55 mL. Instead of using the standard concentration (1 mg/mL) option in the library, the nurse entered a custom concentration of 1.5 mg/55 mL, which resulted in a concentration of 0.027 mg/mL. Given the basal rate of 1.5 mg/hour, the patient received the entire 55 mg of morphine within an hour and was transferred to an intensive care unit for treatment. No outcome was reported.

Some of the above-cited errors appear to be mental mix-ups in which the “dose per hour” was paired with the total infusion volume—for example, a heparin dose of 800 units/hour from a 25,000 units/250 mL bag ended up as a concentration of 800 units/250 mL. One of the errors appears to be a mix-up in which the “per mL” concentration was paired with the total infusion volume—for example, a 0.2 mg/mL concentration of milrinone in a 20 mg/100 mL bag ended up as a 0.2 mg/100 mL concentration. Sometimes, the way the concentration is expressed on labels, particularly if the label includes technician instructions for admixture, has also contributed to mistaken concentrations. Custom concentration options that inadvertently remain in the drug library after a limited number of standard concentrations have been added to the library is another factor associated with errors. Custom concentrations may be required for some medications that are dosed according to body weight or surface area. But leaving the option open to enter the concentration of infusions that have since been standardized needlessly increases the risk of patient harm.

Another factor in some of the above-cited errors is misunderstanding the significance of a soft low concentration alert. Since the primary emphasis on averting IV errors is often on doses that exceed maximum limits, “low concentration” soft alerts may be misinterpreted as being similar to “low dose” alerts. Pharmacists responsible for building and maintaining pump libraries also may not fully appreciate the importance of building hard stops for low concentration alerts, particularly for high-alert medications.

There are several lessons to be learned from these events to maximize safety when using custom concentrations with smart infusion pumps.

Require doses to be expressed in the metric unit. Ensure that doses in protocols and order sets for infusions include the metric unit of dosing (mg/hour, mcg/kg/hour, etc.). An order for an infusion with just the infusion rate (e.g., mL/hour) should not be accepted, even if only one standard concentration of the medication is being used hospitalwide. Standardized order sets and electronic prescribing systems should allow the prescriber to select only the standard concentration(s) when applicable. Also, orders for infusions should not be prescriptive regarding the concentration—only the patient’s dose (mg/hour, mcg/kg/min, etc.) should be specified to avoid the risk of variable concentrations being ordered. If fluid restrictions are necessary for a patient, a “double” or “triple” concentration can be prescribed without specifying the amount of drug per mL.

Tailor labels to MAR/pump settings. The medication administration record (MAR) and the infusion label should present the drug and concentration (and infusion rate, if provided) in the same units and sequence required when programming the pump, with specific instructions for custom concentrations as necessary. Technician preparation instructions (e.g., calculations) should not be included on the final product label.

Verify pump programming. At hospital-defined steps (e.g., new bag/bottle/syringe, change in the rate of infusion) for selected high-alert medications, require an independent double check using the EHR/MAR/eMAR and available technology (e.g., smart pumps, barcode scanning technology) to verify and document the following before starting the infusion: drug/solution, drug concentration, rate of infusion, patient, channel selection, and line attachment. (With interoperability, the latter two elements still require practitioner verification if technology is employed to verify/autopopulate the other elements.) Exception: Titrated medications (e.g., vasopressors) to effect. Be sure the final infusion rate falls within an expected range. Entering an erroneous, low concentration will often result in a high, atypical infusion rate, which should serve as a signal to reverify the pump settings.

Look for ISMP’s updated smart pump guidelines later this year. The draft guidelines will be available on http://www.ismp.org for public comment.

This column was prepared by the Institute for Safe Medication Practices (ISMP), an independent, charitable nonprofit organization dedicated entirely to medication error prevention and safe medication use. Any reports described in this column were received through the ISMP Medication Errors Reporting Program. Errors, close calls, or hazardous conditions may be reported online at www.ismp.org or by calling 800-FAIL-SAFE (800-324-5723). ISMP is a federally certified patient safety organization (PSO), providing legal protection and confidentiality for patient safety data and error reports it receives. Visit www.ismp.org for more information on ISMP’s medication safety newsletters and other risk reduction tools. This article appeared originally in the May 31, 2018 edition of the ISMP Medication Safety Alert!