When the Institute for Healthcare Improvement (IHI) initiated the 100,000 Lives Campaign in late 2004, Advocate Good Samaritan Hospital joined the endeavor to promote patient safety by instituting the six components of the initiative, including development and deployment of a Rapid Response Team (RRT).

The RRT is a team of clinicians who bring critical care expertise to the patient’s bedside with the goal of responding to a clinical concern before it becomes a devastating event (Franklin & Matthew, 1994). Numerous research studies have cited that 60 to 70% of patients who have a cardio-pulmonary emergency show signs of clinical instability as many as 8 hours prior to the event (Galvagno, Correll, & Narang, 2007). Addressing physiologic changes early may defer an untoward event, decrease complications, and ultimately impact overall length of stay.

Implementing the RRT
Advocate Good Samaritan Hospital, a Level One Trauma Center and Cardiovascular Center of Excellence, has been recognized for exceptional clinical outcomes. Our 340-bed suburban hospital serves a community of patients including many who have multiple co-morbidities and require intense medical services. Because Advocate is a community hospital without a residency program, a high level of collaboration between physicians and nurses is essential. Implementing an RRT, therefore, was a high priority.

A multidisciplinary team, consisting of physicians, advance practice nurses (APNs), nursing administration, and respiratory therapists was formed to outline a structure for this endeavor. The APNs were a natural choice to lead the team because of their ability to bring clinical expertise and best practice into actual patient care. In addition to the APN, other members of the RRT include a respiratory therapist, critical-care charge nurse, the patient’s bedside nurse, and the attending physician, who is always contacted during the call. The response team was later broadened to include a pharmacist assigned to respond to every call, to utilize their clinical expertise.

All newly employed staff members learn about the rapid response team during orientation. To further reinforce its presence, the team participates in the annual associate safety fair. Staff members are empowered to call for RRT support for a variety of reasons. The most common reason besides a patient’s obvious physical deterioration is a subtle change that causes the nurse concern.

Prior to implementing the RRT in August 2005, a number of tools were developed to guide the team’s actions and collect data to monitor outcomes. These included policies and practice protocols for the APN, a documentation flow sheet, and quality improvement surveys.

During an RRT call, the APN utilizes evidence-based practice protocols for immediate interventions and then contacts the attending physician for further direction. Documentation of assessment and interventions occur on the RRT flow sheet. Additional support and education for the bedside nurse occur immediately after the event.

Continuous Quality Improvement
One of the advantages of the rapid response team is the opportunity it provides to identify areas for improvement. Collected data gives the team objective evidence by which to measure performance, identify trends, and recommend changes.

Over the past year, the APN practice protocols were revised to meet various needs of our patient population. Additional evidence-based guidelines were implemented, which addressed rapid interventions in possible stroke-related events and early identification of patients with sepsis.

During actual calls, the team has the opportunity to give immediate feedback to staff members providing care. This reinforces their critical thinking, communication skills, and early identification and interventions for a change in the patient’s condition.  To evaluate the team’s effectiveness in meeting these objectives, the staff nurses are also asked to complete a short survey at the conclusion of the call.

The team also completes a real-time evaluation of the RRT process by monitoring parameters such as equipment availability, responsiveness of the attending physician, and involvement of the bedside nurse.

Some of the RRT indicators reviewed monthly include:

The monthly case review meeting has been a powerful and effective strategy for capturing opportunities for improvement. Since the inception of the RRT, the advance practice nurses, respiratory therapist, pharmacist, physician champion, and quality management representative have met to review each case. The case review allows the team to evaluate the patient’s status leading up to activation of the RRT, the subsequent care delivered by the team, and clinical outcomes related to the interventions. Through case review, the team can identify practice patterns that indicate a need for further action and follow-up. Trends are identified by analyzing key quality indicators. Information learned during case review has been shared with other teams throughout the organization to promote positive clinical outcomes.

Now that the team has been in place for more than 4 years, several trends in care and medication safety have emerged. Since implementation of RRT, Code Blue events have decreased from 7 per 1,000 patients discharged in 2005 to 4.7 per 1,000 patients in 2008 (Figure 1). 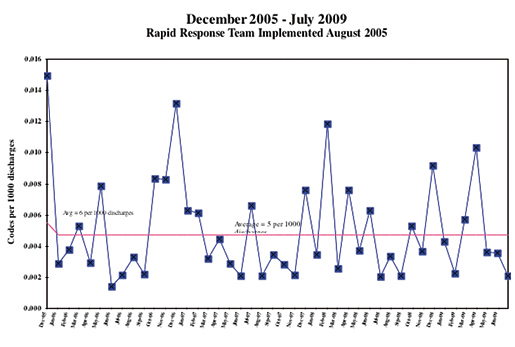 Timing of the RRT calls is monitored to identify a relationship between staffing patterns and the actual time of the call. In addition, the length of the call is monitored to assist the CCU manager in meeting the staffing demands of the unit since the CCU charge nurses are consistent responders on the team.

Figure 2 represents the primary reasons for the RRT calls. The top three are staff concern, mental status changes, and oxygen desaturations. Staff members are encouraged to call the RRT if they have a heightened concern about a patient’s condition. Additionally, through further detailed review of individual cases, an interesting pattern emerged related to the use of hydromorphone (Dilaudid®) in the hours preceding the RRT call. 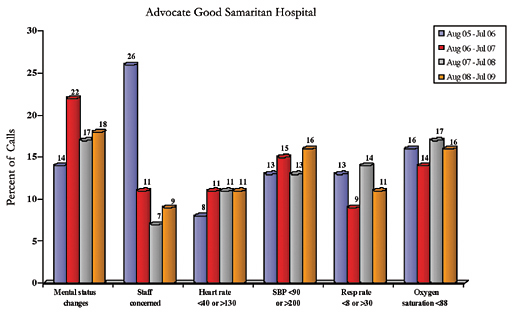 Hydromorphone Case Reviews
Across a 15-month period, case reviews of 13 calls revealed hydromorphone as a common element. The presenting symptoms ranged from change in mental status to severe hypoxia. Further analysis of these calls identified concerns regarding hydromorphone dosing and monitoring of patients receiving this drug. Of particular concern was the need to correctly dose elderly patients, especially those who were opiate naïve or had other co-morbities such as cardiac, respiratory, or metabolic abnormalities. For example, an elderly patient received multiple 1 mg doses of IV hydromorphone in the 24 hours preceding an RRT call. Although this sounds very much like a common dose for the well-known drug Morphine, 1 mg of IV hydromorphone is equivalent to 6.6 mg of IV Morphine (Galvagno, Correll, & Narang, 2007; Thomson Healthcare, 2008).

As a result of these findings, a multidisciplinary effort was launched. The collaborative team included advanced practice nurses, pain and palliative care nurses, physician leadership, and pharmacy. To ensure the safety of all patients receiving hydromorphone, the team devised a plan that included:

Outcomes
Since implementation of the action plan, an overall decrease in percentage of RRT calls related to hydromorphone use has occurred (Figure 3). Because the number of calls vary from 15 to 33 per month, it was more meaningful to look at the percentage of calls related to hydromorphone rather than the actual numbers, which were as high as 3 per month. 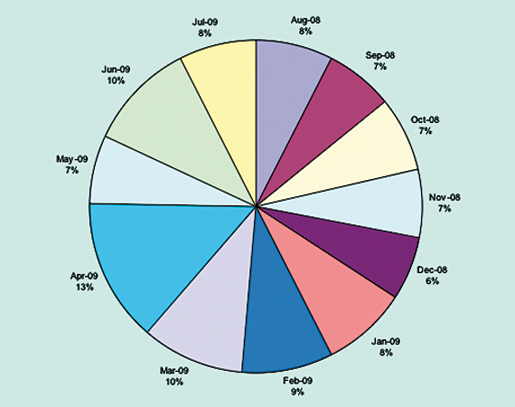 As seen in Table 1, several more detailed trends related to hydromorphone were also noted. Although the total number of RRT calls for each 12-month period remained relatively stable, the number of RRT calls related to hydromorphone use decreased dramatically between year 1 and 2. It was during this time period that the multidisciplinary team educated staff and developed and implemented controls. As expected, further analysis shows that the percentage of months in which hydromorphone-related RRT calls occurred has also decreased.

Additionally, the team has noted a downward trend in patients transferred to the CCU during RRT calls. Because involvement and education of the bedside nurse during RRT calls is part of the process, the team identified that on-going education with each RRT call would assist nursing staff to identify early predictors of deterioration. This mentoring has assisted nurses to assess condition changes earlier, enabling them to manage patients on the nursing units rather than transferring to the CCU. The data shown in Table 2 supports this assumption. In 2006, 46% of patients from RRT calls were transferred to the CCU. Transfers from 2007 to 2009 ranged between 33 and 39%. Improved knowledge among the nursing staff related to typical hydromorphone doses and the need to closely monitor patients for subtle changes that may precede an adverse event contributed to these outcomes.

In addition, nursing satisfaction with the RRT response was rated near 100% based on event-related surveys. Anecdotally, physician acceptance of the RRT’s value and service improved house wide, which led to the RRT members receiving the system-wide Advocate Patient Safety Award in 2007.

Future Review
There have been a total of four cases in 2009 in which the patient required the intervention of the RRT after receiving hydromorphone. Detailed review of these cases confirmed that all patients received appropriate doses for their age and medical condition. It interests us that three out of the four cases involved patients between 21 and 30 years of age. This is a different population from our original group of elderly patients, who were often opiate naïve. In addition, three of the four cases had received additional medications and treatments that may have contributed to mental status changes that precipitated an RRT call. Clearly further monitoring and detailed case reviews are needed.

Another patient population that bears further investigation are medical patients with obstructive sleep apnea (OSA). The OSA patient population may be at an increased  risk for respiratory complications when receiving sedatives and/or narcotics following surgical procedures. However, not all medical patients receive a preoperative risk assessment that would identify OSA. Reviewing cases of OSA has revealed further opportunities for improvement.

Conclusions
Because our RRTs consistently follow a process to identify trends and evaluate methods for process improvement, the quality of care at Advocate has improved. Mobilizing a multidisciplinary RRT was effective in designing and implementing solutions to enhance safety initiatives involving hydromorphone.  Because of this work, the team will continue to monitor narcotic-related events. Measuring outcomes is essential in determining how process change has impacted patient safety.