Not all medication errors are created equal. In efforts to improve patient safety, healthcare systems need to give first priority to averting the medication errors with the greatest potential for harm. By targeting efforts to avert such errors, hospitals can achieve the most rapid and significant impact on improving medication safety.

General-purpose infusion pumps, which made modern IV therapy possible, increased the potential for error. While precisely delivering IV medications from a few drops to as much as one liter per hour to patients weighing anywhere from 600 g to more than 300 kg, until recently the pumps could not limit the doses of infused medications or be customized easily for specific patient populations (Eskew, et al., 2002).

The ever-increasing complexity of the nursing environment and the current nursing shortage further increase the possibility of error. Demands often exceed an individual’s capacity to function without error, even for highly experienced clinicians (Hatcher, et al., 2004). Unnecessary variability in drug concentrations, dosing units, and dosing limits used in different areas of a hospital further complicates infusion programming and increases the risk of harm (Bates, et al., 2005).

Examples of potentially fatal errors include programming an insulin infusion for a 67 kg adolescent at 7 units/kg/hr (dose ordered was 7 units/hr); mistakenly pressing a “0” in place of a decimal on a neonatal infusion, changing from 3.2 to 304 mL/hr; and entering the dose of heparin at 800 mL/hr rather than 800 units/hr (correct rate was 8 mL/hr). A nurse would never give 100 pills to a patient, but can all too easily program a general-purpose IV pump to deliver a comparatively massive overdose (Hatcher, et al., 2004, Thurman, et al., 2004).

Preventable ADEs are also costly: approximately $5,000 per PADE (1993 dollars), with projected annual costs for a 700-bed hospital of $2.8 million — excluding costs of injuries to patients, malpractice costs, cost of admissions due to ADEs, or litigation (Bates, et al., 1997). The Nebraska Medical Center found increased costs per ADE of $8,000 (Graham, 2004). A 2005 survey by the University HealthSystem Consortium revealed that settlements for injuries related to PCA errors ranged up to $750,000 (UHC, 2003).

To meet the need for improved IV medication safety at the point of care, “smart technology” was developed to standardize IV infusion administration, reduce IV programming errors, and streamline processes for IV administration by forcing many functions (Bates, et al., 2005).

Development of “Smart” Infusion Technology
In the mid- to late-1990s, Cardinal Healtha selected the Vanderbilt University Medical Center and the Nebraska Medical Center to help in the development of a new infusion safety technology. The use of human factors engineering tools and techniques resulted in a modular infusion safety system that was introduced at the American Society of Health-System Pharmacists meeting in December 2001.

A point-of-care unit contains the computer “brain” that programs the infusions and contains the safety software. Lightweight, large-volume infusion modules, as well as syringe, patient-controlled analgesia (PCA), capnography (EtCO2), and pulse oximetry (SpO2) modules, can be attached to or removed from the brain as needed for each patient. A common user interface for all modules helps to reduce complexity and improves ease of use.

The safety software can also be added to some traditional infusion pumps. The VA San Diego Healthcare System added IV amedication safety software to existing infusion devicesb in nine areas of the hospital.

A hospital configures up to 10 profiles for specific patient care areas (e.g., med-surg, adult ICU). Profiles include customized operating parameters, programming options, and drug libraries. Clinician selection of a specific profile adjusts the performance characteristics of the device to meet the needs of that particular patient care area or patient type. Each drug library contains institution-specific parameters for up to 1,000 drugs, all of which can be customized. The drug library provides the best-practice guidelines for each medication. The software performs a final “test of reasonableness.” If programmed parameters are outside of pre-established limits, the software provides an alert that must be addressed before infusion can begin.

In the programming errors above, the software would not allow the patient’s weight to be used in programming an insulin infusion. The neonatal infusion would not exceed a very low rate limit (e.g., 20 mL/hr) without notification, and the heparin overdose would be prevented by a maximum dose limit, e.g., 2000 units/hr. All alerts and the clinician’s response, e.g., correcting the programming of heparin to the ordered 800 units/hr, are documented in CQI logs. CQI data can be used to assess current practices and safety levels, guide improvements to optimize care and reduce costs, and report averted errors to the Joint Commission on Accreditation of Healthcare Organizations (JCAHO) and other regulatory institutions (Hatcher, et al., 2004).

The IV Medication Harm Index (Sullivan, 2003) allows clinicians to objectively measure harm that has been averted through use of the system, based on drug risk/overdosing range, level of care/acuity, detectability of adverse event, and a summated score with a range of 3.5 to 14, with a higher score indicating greater risk of harm (Table 1). 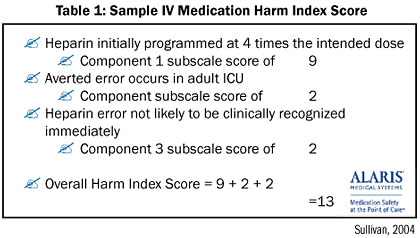 Speed to Impact
An IV medication safety system is associated with lower costs and more rapid implementation, compared with CPOE and BCMA (Wilson & Sullivan, 2004). Ease of implementation also is considered. Clarian Health Partners (1,400 beds) in Indianapolis, IN, was the first system in the United States to implement the systema on a hospital-wide basis. Development of a customized data set, including obtaining pharmacy and physician consensus among three hospitals, was completed in 60 days. Staff training included expert sessions and skills labs that combined hands-on exposure with an internet-based training module provided by the vendor. Of 2000 nurses, 97% completed the on-line simulation training, and 82% also attended hands-on in-service training sessions. The go-live installation in the first hospital was accomplished in three hours and required no additional FTEs (Eskew, et al., 2002).

Researchers at Brigham and Women’s Hospital (750 beds) in Boston conducted the earliest study of the efficacy of the new system in preventing medication errors (Rothschild, et al., 2005), while nursing evaluated various technologies for clinical use.

Initial research data from use of the earliest version of the software identified compliance issues. However, in practice, compliance improved to excellent following staff training that improved the “culture of use” and collaboration with the company that led to upgraded software with a more natural “mapping” of the IV infusion therapy that was easier to use. Following these changes, staff reported steadily improved compliance and excellent nursing acceptance.

After studying the issues for more than a year, Brigham and Women’s Hospital implemented the new IV safety system hospital-wide. Key deciding factors were the system’s speed to impact, error prevention, and platform for future safety innovations and wireless networking. Another very important consideration was the system’s data-collection capabilities, which would provide previously unavailable data that could allow staff to measure impact and identify process improvements (Brigham and Women’s Case Report, 2004).

Results
As hospitals are replacing their legacy infusion technologies, the smart infusion pumps are rapidly demonstrating their value in preventing IV pump programming errors and also identifying practice issues that previously were difficult to access. 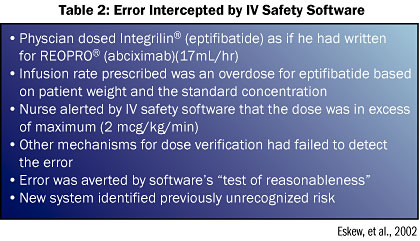 An 8-month study in three patient care areas representing 14,000 patient days at The Nebraska Medical Center (680 beds) showed 157 averted errors, with a potentially life-threatening dose initially programmed in 17 of these (Graham, 2004; Malashock, et al., 2004). Hospital administrators concluded that the incremental hospital costs of treating those errors would have significantly exceeded the cost of the IV medication safety systems (Graham, 2004). 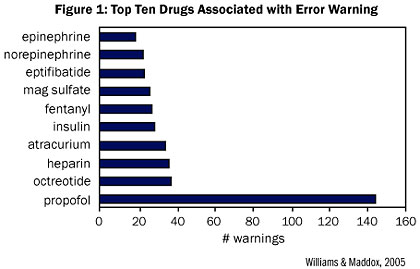 In the first six months of using the new system at Children’s Hospital and Health Center, San Diego (238 beds), approximately 15% of the alerts led to reprogramming, including averted errors that otherwise would have resulted in overdoses of high-alert medications at several times the dosing limits. Time-based data revealed that harm is not random, i.e., dosing errors occur in identifiable patterns, peaking significantly during busy times such as shift change, high admission volumes, and activities requiring drug distribution (Billman, 2004).

The smart IV systems are very effective in preventing programming errors. As illustrated by the above examples, however, not all alerts result in reprogramming. A high percentage of the alerts that are soft (i.e., can be overridden) result in confirmation that the dose exceeding the limit range is desired. This typically is a case where the best practices and the current practices are not in alignment. The Children’s Hospital data showing approximately 85% of the alerts resulting in overrides illustrates the value of the CQI data for clinical practice improvement. Hospitals employing smart infusion systems are bringing the current and best practices into closer alignment by using the data to measure and change practice. While not classified as errors in most cases, these alignment issues are nonetheless significant departures from accepted practice.

Conclusion
In targeting efforts and allocating resources to improve medication safety, hospitals should give priority to errors that pose the greatest risk of harm. Experience and CQI data from multiple hospitals — major medical centers, regional healthcare systems, and community hospitals — demonstrate the ability of an IV medication safety system to help prevent the most harmful medication errors and to provide actionable data for process improvements. Implementation of an IV medication safety system allows safety efforts to impact the highest-risk errors most rapidly and with the highest degree of success — namely, IV medications at the point of delivery to the patient (Williams & Maddox, 2005).

From 1972 to1983 Vanderveen was on the faculty of the College of Pharmacy at Medical University of South Carolina and was director of the Division of Clinical Pharmacy.ÝHe also had a faculty appointment in the College of Medicine and was on staff at the Charleston VA Hospital. Vanderveen’s clinical practice was in nutritional support, and he co-founded one of the first multidisciplinary nutrition support teams. During his academic tenure, his interests were closely tied to drug therapy in patients receiving parenteral and enteral nutrition. Vanderveen received his BS and MS degrees from Purdue University School of Pharmacy and his PharmD degree from the Medical University of South Carolina.