Nursing Satisfaction
Experience has shown that nursing acceptance is critical to the successful implementation and use of new technology. Nursing administrators at St. Joseph’s/Candler Health System, a 675-bed facility in Savannah, Georgia, believe that positive feedback regarding the IV medication safety systema resulted from the level of pre-implementation education of nursing and hospital staff coupled with the involvement of nursing in research and implementation of the technology. CQI data and regular checks using direct observation show 98% to 100% compliance for nurses using the safety software for programming. Implementation of the system was felt to demonstrate the hospital’s commitment to nurses and to give SJCHS an edge in nursing retention and recruitment (Fields & Peterman, 2005).

A survey conducted at The Nebraska Medical Center (680 beds) shows that over 90% of users said the IV safety system was “Easy” or “Somewhat Easy” to program and would “Agree” or “Strongly Agree” that the system provides a valuable safety net at the point of care (Graham, 2004). Results show that nurses strongly prefer using the infusion safety system over their previous IV pumps. Data also showed that use of the safety software prevented potentially fatal medication errors (Graham, 2004; Malashock, et al., 2004). Staff feels that infusion safety technology is needed to protect both patients and nurses against critical errors at the point of care (Graham, 2004).

Staff at City of Hope, one of the top 100 cancer centers, had a similar response. Nursing administrators felt that implementation of the IV safety system and the resulting CQI data on averted errors allowed cultural change to be introduced in incremental steps, as nurses saw the impact of this technology on medication errors (Steingass 2004).

Best Practice Improvements
The examples below are representative of best practice improvements that have been made as a result of infusion safety system implementation.

Staffing Effectiveness. At Children’s Hospital of San Diego, chronogram analysis (Figure 1) led to highly targeted practice improvement initiatives to address peak times for medication errors. Units were closed during shift change, and the timing of several elective activities was changed to reduce distractions. Since these changes, pump alerts are much less frequent and all of the former error peaks have been eliminated (Billman, 2004). 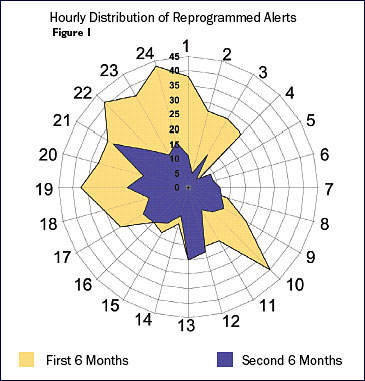 Improved Medication Protocol. Using CQI data from the safety software, staff at St. Joseph’s/Candler revised the heparin protocol to eliminate rate calculations by programming the dose (units/kg/hour) directly into the smart pump. This eliminated at least three steps in the medication process, multiple calculations, and multiple opportunities for error, thereby improving the safety and timeliness of heparin administration. The system allowed staff to discover that, if IV drug labels were reformulated to include the total volume and amount of drug, nursing staff would be able to program the system more easily and deliver the correct dose of medication (Williams & Maddox, 2005).

Return On Investment (ROI)
Analysis of reprogramming events documented in CQI logs at The Nebraska Medical Center for three nursing units involved in an 8-month study showed that an annual incremental expense that was avoided through use of the IV safety systems would be approximately $712,000 (Table 1) (Graham, 2004). 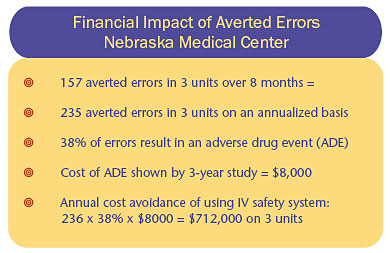 With three hospitals, 730 beds, 510 staff physicians, and gross annual revenue of $1 billion, Spartanburg Regional Health System (SRHS) is ranked as one of the top 100 most-wired hospitals in the United States. Implementation of 556 IV medication safety systems was accomplished in less than 6 weeks. Early CQI data indicated that the benefits of the system far outweighed any additional cost. Nurses, physicians, and pharmacists quickly saw the benefits of this technology. Error prevention data allows the hospital to demonstrate to the community their improvements in medication safety and commitment to quality patient care (Shingler, 2004).

Wireless Networking — “Smart” Infusion Systems
Wireless networking is one of several recent advances that have increased hospitals’ ability to use IV safety systems to improve medication safety. Wireless networks can link individual infusion devices to a central server, allowing CQI teams to obtain data for process improvement efforts and to update the software quickly. Networking can accelerate best practice and process improvements and provide insight into the usability of the equipment and the general practices associated with IV drug infusions (Pratt, 2004).

Sharp HealthCare in San Diego, California, installed IV infusion safety systems in five acute care hospitals totaling more than 1,400 beds, and then added wireless data transfer to optimize system use and maximize safety benefits. Analysis of CQI data shows that there were at least 13 harmful events avoided in 2 months at a single hospital (Table 2). Researchers felt that in any of these 13 cases, if the clinician had walked away after the infusion were started, there is little doubt the patient would have had an adverse event. Most events involved drugs that could cause clinically significant hemodynamic changes within minutes. Physiologic changes caused by heparin and insulin infusions could easily go undetected until they became clinically severe, for example, gastrointestinal hemorrhage or severe hypoglycemia. Feedback from the safety software prompting the clinician to make a correction avoided these adverse effects (Pratt, 2004). 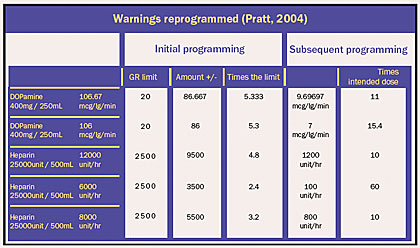 Staff at Sharp has confidence that the IV safety systems with wireless connections have reduced harmful events associated with IV drug infusions and have provided tremendous insight into the administration of IV drugs. In addition, researchers note that unnecessary variations in treatment should be minimized and greater standardization should be used in IV medication therapy to improve patient safety. The safety software in the IV medication safety systems not only helps avert high-risk medication errors but also enables this standardization. Regular analysis of IV safety system data provides insight into avoiding harm, determining where learning needs exist with respect to IV medication safety, and to better understanding of current practices in the administration of continuous IV drug infusions (Pratt, 2004).

“Smart” Pain Management —
PCA with Continuous Respiratory Monitoring on One System Platform
PCA is an effective method of administrating high-risk narcotics. Nonetheless, analgesics-narcotics (Nebeker, 2005) and PCA therapy are associated with significant hazards (ISMP, 2002, 2003, 2005; JCAHO, 2004). MEDMARX and USP Medication Errors Report data from September 1, 1998, through August 31, 2003, shows that when PCA pumps are involved in medication errors, the chance for patient harm increases more than 3.5 times (USP, 2004). Smart systems that were previously available for general-purpose IV pumps now can provide the same functionalities for PCA. Averting PCA-related programming errors is important; however, with PCA, these are not the only potential cause of harm.

A major risk associated with PCA delivery of narcotics is the potential for respiratory depression from over-sedation. Individual response to opioids varies greatly. Even correctly programmed doses of opiates can suppress respiration and decrease heart rate and blood pressure (ISMP, 2003). In addition, factors such as “PCA by proxy” (doses administered by someone other than the patient), improper patient selection, and inadequate patient monitoring can also result in over-sedation (ISMP, 2003; JCAHO, 2004). Patients receiving PCA therapy may have undiagnosed co-morbidities such as obstructive sleep apnea. For these reasons, when using PCA, it is important to closely monitor not only device programming but also patient’s response to the therapy.

As shown in Table 3, continuous respiratory monitoring includes both pulse oximetry (SpO2) and capnography (EtCO2). The safety system includes pulse oximetry and capnography with PCA modules on a single platform with a common interface. Although earlier capnography devices were cumbersome and limited to the peri-operative and intensive care units, the newer technology is both user- and caregiver-friendly. As a result, capnography can now be used to monitor non-intubated patients in general nursing areas. When used with the PCA module, the safety system offers PCA/EtCO2 and PCA/SpO2 trending data at the bedside to assist clinicians in assessing respiratory response to PCA therapy. 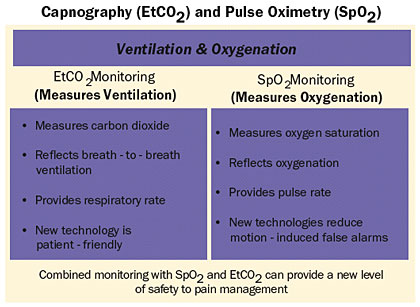 St. Joseph’s/Candler was the first hospital system in the U.S. to implement the smart system.b In the first 3 weeks of use, the system helped SJCHS identify five patients who may have experienced undesirable clinical outcomes as a result of PCA therapy without continuous respiratory monitoring — three cases of previously unrecognized sleep apnea, one case of probable pulmonary embolus, and one case of early congestive heart failure. Experience has shown that despite care in programming of PCA devices and clinician second checks, a surprising number of errors were prevented in the first weeks of use. Continuous pulse oximetry and capnography may allow clinicians to identify undiagnosed conditions that predispose patients to respiratory complications from PCA narcotic delivery (Maddox & Williams, 2004).

PCA therapy is an effective method of titrating pain therapy but also potentially unforgiving if errors occur or patient status changes. The combination of best practice rules and use of continuous pulse oximetry and/or capnography monitoring reduces the risk of over-sedation and respiratory depression (Maddox & Williams, 2004).

Quality Improvements
Smart IV systems can be the “canary in the mine” to identify where nursing workload issues exist and to target quality improvement to patient safety, best practices, and nursing satisfaction. These factors act synergistically and ideally position this medication safety system to function as an “information hub,” capable of integrating future innovative technologies and data — which holds the potential of further improvements in patient and medication safety (Billman, 2004).

Wireless networking and pain management systems, including PCA with capnography and pulse oximetry, further demonstrate the ability of “smart” infusion safety technology to help hospitals avert errors and undesirable outcomes and to quickly identify opportunities to improve best practices with regard to medications associated with the greatest risk of harm — IV medication errors at the point of care.

ISMP Medication Safety Alert. (2002, May 29). More on avoiding opiate toxicity with PCA by proxy. Retrieved on June 16, 2005, from http://www.ismp.org/MSAarticles/pca.htm