John Snow, the English physician whose work arguably helped to halt an 1854 London cholera epidemic, is considered one of the founders of modern epidemiology. His work led to fundamental changes in the water and waste system of London and other cities around the world. He was also one of the first physicians to calculate doses for various forms of anesthetic, allowing patients to undergo procedures with limited pain (John Snow, n.d.).

In the mid-19th century, Londoners obtained their drinking water from pumps throughout the city that drew water from public wells or the River Thames. Unlike today, the Thames was quite polluted because it served as both a source of fresh water and a means for waste disposal. In addition, many homes sat above private cesspools because a comprehensive sewer system did not exist. It was not uncommon for a drinking well to be located relatively close to some of these homes.

In 1854, there was an outbreak of cholera in London’s Soho district, one that claimed several hundred lives. While the germ theory of disease had not yet been developed, Snow nevertheless rejected the then-popular miasma theory, which postulated that diseases such as cholera and bubonic plague originated from noxious forms of “bad air.” Drawing on his knowledge of statistics, Snow decided to plot the homes of the cholera victims as dots on a street map, revealing a cluster of deaths around a single water pump located on Broad Street (now Broadwick Street)—a pump that was later discovered to be extremely close to a cesspool. Snow’s work led to the removal of the pump’s handle, rendering it impossible to draw water; this action either ended or contributed to ending the cholera outbreak. Subsequent work linked cholera cases to contaminated water taken from the Thames and distributed to various parts of London by a private water company (John Snow, n.d.). 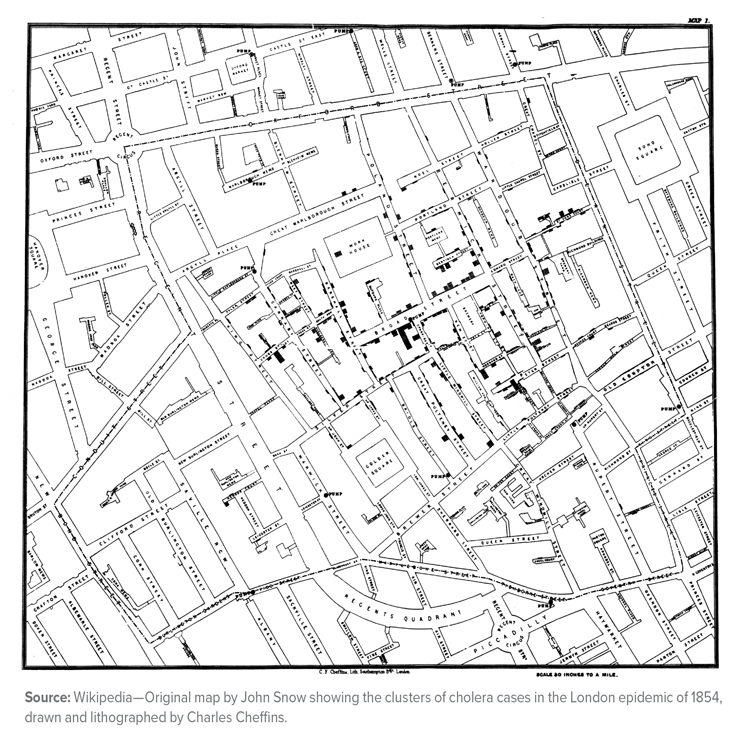 Despite Snow’s work, government officials considered the fecal-oral route of disease transmission too startling for the public to accept and therefore rejected his theories (John Snow, n.d.). Snow’s experience is an example of the challenge health officials even today face in their effort to protect the public from diseases, such as measles.

The importance of analytics in epidemiology makes a strong case that Snow can also be viewed as one of the founders of clinical visualization. In his work, Snow used statistical techniques and visualizations to make his argument, such as through his cholera dot map.

At a recent analytics conference, Barbara-Jo Achuff, MD, a visionary clinician from Texas Children’s Hospital, illustrated the importance of epidemiology and analytics in clinical care, drawing a direct link to Snow’s work in London more than 150 years ago (Achuff & Welt, 2019).

As an attending in the cardiac intensive care unit (CICU), Achuff cares for very sick infants and children with heart disease. While sedation is necessary to allow for proper healing after surgery or CICU procedures, sedation also poses a risk to young children. In 2016, the U.S. Food and Drug Administration (FDA) issued the following warning:

“… repeated or lengthy use of general anesthetic and sedation drugs during surgeries or procedures in children younger than 3 years or in pregnant women during their third trimester may affect the development of children’s brains.” (FDA, 2019)

This new risk factor made tracking of sedation dosing a critical part of the care delivered in Achuff’s CICU. Recognizing that sedation medication data was available within the hospital’s EMR system, she worked with her IT staff to generate daily CICU medication administration extracts. Achuff then applied visualization analytics software to the extracts to track point and total sedation levels through dashboards for every patient treated in her unit. She also included the sedation tracking visualizations in her daily patient rounding workflow for herself and her clinical colleagues.

Using the knowledge gained from tracking sedation using the dashboards, Achuff and her team developed protocols to standardize treatment across the CICU, minimizing the use of sedation and its impact on children’s brain development. Her work delivered these results:

>          Continued decrease in sedation dosing and use of bolus doses

>          Improved quality and use of clinical sedation protocols

Including the daily surveillance sedation dashboards in clinical workflow helps ensure that the critical issue of sedation dosing is properly monitored. In addition, -patient-specific tracking allows for the identification of children who are not responding to the administered sedation medications. Such non-responders require higher doses of first-line sedation drugs, something easily identified through dashboards.

These children can then be switched to more effective second-choice medications that require lower dosing and present less of a threat to brain development. Most non-responder children are discovered within two days of the start of sedation when using sedation dashboards, a discovery period much shorter than previously recorded.

The link between Snow and Achuff spans more than 150 years of conceptualization, experimentation, and discovery. During that time, our understanding of disease has grown exponentially, the technology at our disposal to diagnose and treat disease has expanded (e.g., MRI, robotics, sensors), and our ability to collect and analyze enormous quantities of data has exploded (e.g., EMR, Hadoop, visualization software).

It took 12 years after Snow’s initial work for the government to officially link the cholera outbreak to a source of drinking water (John Snow, n.d.). We can only imagine how impactful Snow’s work could have been if he had access to the dashboard and visualization tools available today.

Properly designed and focused dashboards immediately impact clinical care. Patient sedation at Texas Children’s Hospital’s CICU follows a very different path than it did a few years ago. Both patients and clinicians are actively monitored to ensure proper adherence to best practices.

Analytics and visualization software offers clinicians effective and easy-to-deploy tools that directly impact patient care. As subject matter experts, clinicians are tasked to develop use cases for clinical dashboards and to work with technical experts to put them into use. Effective dashboard development requires partnership and trust between these groups. Working together, these experts can mine new knowledge and deploy it to improve patient health and save lives. The visualization analytics journey started by Snow and joined by Achuff continues, offering enormous benefits to clinicians and their patients.

Barry Chaiken is the clinical lead at Tableau Healthcare and has more than 25 years of experience in medical research, epidemiology, clinical information technology, and analytics. He is board certified in general preventive medicine and public health and is a fellow, and former board member and chair of HIMSS. As founder of DocsNetwork Ltd., Chaiken worked on quality improvement studies, health IT clinical transformation projects, and clinical investigations for the National Institutes of Health, UK National Health Service, and various academic medical centers. Chaiken may be contacted at bchaiken@tableau.com.