Huntington Hospital, a 525-bed not-for-profit tertiary care community hospital, was established in Pasadena, California, in 1892; its mission is simply to excel at the delivery of healthcare to its community. The last two years have seen a whirlwind of activity on the technical front as Huntington Hospital planned, budgeted, and began to implement an aggressive, multiphase healthcare information systems project. When the legacy clinical and administrative systems were replaced with updated technology (Phase I), the hospital turned its attention to the introduction of new functionality.

The third quarter of 2004 was spent preparing for the September 30th go-live of online nursing documentation. Phase II of Huntington Hospital’s information technology strategic plan involved the further development of Huntington Hospital’s electronic medical record by the installation of Meditech’s Patient Care System (PCS). Under the guidance of Huntington’s new director of clinical informatics, a team of over 20 nurses and occupational, physical, and respiratory therapists had devoted nearly a year to develop the system configuration. They developed and tested every documentation tool, from specialty care plans to assessment templates and medication administration records. The original go-live date of early April was delayed due to the unexpected length and intensity of the winter’s high patient census; nurses could simply not be relieved from their clinical duties to attend training sessions.

Summer saw a massive nurse training effort whereby each registered nurse underwent three full days of computer training. All other nursing and ancillary staff, including the physical, occupational, and respiratory therapies, completed their training in two days. Training costs had been budgeted as part of the total system cost, and labor for both the trainers and trainees was transferred to the information systems department cost center. Huntington Hospital found the rental and outfitting of two portable classrooms, each holding 24 training stations, to be a more comfortable and cost-effective solution to the need for training facilities than retrofitting existing space. In fact, the training trailers have been so useful and attractive that staff is hard-pressed to give them up.

Planning for Acceptance
The acceptance of the online nursing documentation by physicians was of great concern to hospital staff. They determined that a combination of extensive communication and flexible training options would be the best approach. The medical executive committee’s official endorsement of the online charting system and its physician training plan was published in the medical staff newsletter.

Training of physicians to view the data entered by the nursing and ancillary staff began in earnest six weeks prior to the go-live. The training season kicked off with a well publicized and surprisingly well attended “Physician Computer Fair.” The hospital’s boardroom was outfitted with 12 wireless workstations, each staffed by a member of the development team. Physicians dropped in throughout the day to receive one-on-one training. Additional services offered by technicians from the information systems department included on-the-spot user names and passwords for remote connectivity, and configuration of wireless devices for use of Huntington Hospital’s “guest” Internet access.

A raffle for a wireless PDA was a popular feature of the computer fair. Any credentialed physician who filled out the entry form was eligible for the drawing. Over 100 physicians signed their names to entry forms and answered “true” to each of three true-or-false questions:

The vice president of medical services drew the winner, and a very surprised neonatalogist won the HP IPAQ at an early-morning staff meeting.

The physician computer fair was followed by a week-long training open house the week prior to go-live, and was complemented by remote demonstrations at physician offices on request.

Clinical informatics staff members maintained a list of physician issues and worked hard to resolve them. Physicians’ concerns that not enough workstations would be available during peak hours were addressed by providing each of the hospital’s 35 interns and residents with lightweight Fujitsu Lifebook wireless notebooks. Nearly 200 COWS (“Computers on Wheels”) were deployed for the use of nursing staff, though the clever “moo” sound was removed for patient comfort reasons.

Physician acceptance of the online nurse charting system has been exceptional. Any weaknesses in the system have been counteracted by the ability to view the chart, with the proper security, from any location inside or outside the hospital. One of the most popular features is the online medication administration record; a physician can readily view all administration times and the full prescription details without the paper chart. 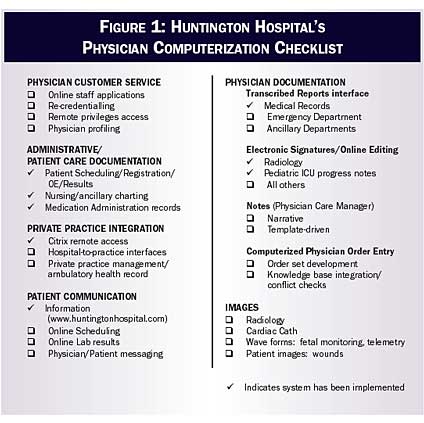 Physicians Are Next
With online nursing charting becoming a reality, members of the newly formed medical staff physician information technology advisory committee felt a need to ramp up their education on the automation process for physician documentation. In droves, the most technically adept members of the medical staff offered to be “guinea pigs” for online order entry process. A high-level physician computerization checklist (Figure 1) was developed to provide an at-a-glance view of progress toward full automation.

The hospital invested in the education of its physician technology leaders by hosted attendance at a number of events. Each served in its own way to inspire excitement about the physician automation effort and provide direction on the course ahead.

One of the most beneficial educational opportunities is the Physician Computer Connection conference hosted by the Association of Medical Directors of Information Systems (AMDIS) each July. It’s short (a couple of days), it’s small (around 100 attendees), and it’s completely focused on the progress of physician automation. Huntington’s contingent learned lessons such as the value of the chief medical information officer role, the absolute necessity of healthcare automation, and the potential that automation provides for great advances in quality healthcare.

Meditech, the vendor of the hospital’s healthcare information system, holds an annual “information exchange” forum dedicated to its physician users, and Huntington Hospital will host its physician leaders at that forum. The hospital also grabbed the opportunity to host Meditech’s regional physician forum on computerized order entry, an opportunity to expand its roster of physician attendees without incurring travel expenses.

A recent flurry of documentation in the clinical literature has left private practice physicians anticipating the need to transition their own patient charts to electronic ambulatory records. In an effort to determine the level of interest, and to respond to increasing requests for direction in this evolution, Huntington’s physician computer services department hosted a noontime demonstration of a private practice management/

electronic health record product offering that integrates with the hospital system. Eighty private practice physicians and their office staff attended. Post-demonstration surveys indicated a high level of interest in collaborating with the hospital to support electronic records along the full continuum of care. From solo practitioners to large physician groups, the demonstration left attendees excited about the advantages of leveraging the expertise of the hospital’s technology base for the advancement of out-patient records.

As the dust settles following the implementation of online nurse charting, the physicians and hospital staff have begun to look ahead to enhance Huntington’s electronic medical record with additional functionality. Online images, from radiology through cardiac monitoring wave forms, are especially anticipated. The selection of the hospital’s filmless radiology (PACS) system is complete, both vendor and hospital resources are scheduled, and, after taking a breather, the clinical technology implementation team is ready to take on the next phase of Huntington Hospital’s healthcare information strategic plan.

Maggie Lohnes is manager of physician computer services at Huntington Hospital in Pasadena, California. She may be contacted at maggie.lohnes@huntingtonhospital.com.