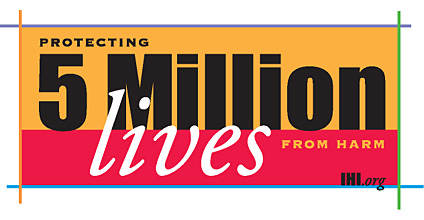 The Institute for Healthcare Improvement (IHI) has announced, with the support of prominent leaders in American healthcare, a national campaign to dramatically reduce incidents of medical harm in U.S. hospitals. The 5 Million Lives Campaign will ask hospitals to improve more rapidly than before the care they provide in order to protect patients from five million incidents of medical harm over a 24-month period, ending December 9, 2008. This represents a continuation of the largest improvement effort undertaken in recent history by the healthcare industry.

The Campaign was announced by IHI President and CEO Donald Berwick, MD, MPP, speaking before thousands of healthcare professionals attending the organization’s 18th National Forum, held in Orlando. The new Campaign, which will be sponsored principally by America’s Blue Cross and Blue Shield health plans, builds upon the success of the 100,000 Lives Campaign, in which 3,100 participating hospitals reduced inpatient deaths by an estimated 122,000 in 18 months through overall improvement in care, including improvement associated with six interventions recommended by the initiative.

Joining Dr. Berwick at his announcement were leaders of America’s Blue Cross and Blue Shield health plans, the American Hospital Association (AHA), the American Nurses Association (ANA), the Centers for Disease Control and Prevention (CDC), the Centers for Medicare & Medicaid Services (CMS), and the Joint Commission on Accreditation of Healthcare Organizations (JCAHO), each pledging that their organization will act as national champions and clinical advisors for the critical work ahead. Also present on stage was Sorrel King, a patient safety activist whose daughter died from a medical error in 2001.

The 5 Million Lives Campaign will promote the adoption of 12 improvements in care (below) that can save lives and reduce patient injuries, and it aims to enroll even more hospitals than participated in the previous Campaign.

“No one in healthcare can feel comfortable with the magnitude of infections, adverse drug events, and other complications that hospital patients endure. Dozens of organizations and programs are now working to reduce that toll. They deserve encouragement. This Campaign joins those efforts, and seeks leverage and scale that our nation has never had before to make care safe — everywhere,” said Dr. Berwick. “We can, and we will, equip all willing healthcare providers with the tools they need to make the motto, ‘First, do no harm,’ a reality.”

IHI estimates that 15 million incidents of medical harm occur in U.S. hospitals each year. This estimate of overall national harm is based on IHI’s extensive experience in studying injury rates in hospitals, which reveals that between 40 and 50 incidents of harm occur for every 100 hospital admissions. With 37 million admissions in the United States each year (according to the AHA’s National Hospital Survey for 2005), this equates to approximately 15 million harm events annually — or 40,000 incidents of harm in U.S. hospitals every day.

IHI defines “medical harm” as unintended physical injury resulting from or contributed to by medical care (including the absence of indicated medical treatment) that requires additional monitoring, treatment or hospitalization, or results in death. (Please consult www.ihi.org for a detailed definition of medical harm.)

“The goal of protecting patients from five million incidents of medical harm in two years is ambitious, but patients and families deserve no less,” said Campaign Manager and IHI Vice President Joe McCannon. “We’re inspired to know that so many courageous hospitals and healthcare leaders share our commitment to addressing this problem. This is the next big step in a major national effort to completely transform the quality of the care Americans receive.”

The six interventions from the 100,000 Lives Campaign

There is no cost for hospitals to join the 5 Million Lives Campaign though there is an obligation to adopt at least one intervention and an expectation of regularly reporting hospital profile and mortality data throughout the Campaign.

As a result of the 100,000 Lives Campaign, joining other effective improvement efforts in American healthcare, many patients have begun to enjoy a new standard of care. Participating hospitals have also made great headway in delivering reliable care for acute myocardial infarction, preventing adverse drug events, and preventing surgical site and central line infections. Dozens of facilities have reported that they have gone over a year without a ventilator-associated pneumonia, a leading killer among all hospital-acquired infections, demonstrating that this sort of complication is not inevitable. Hundreds of hospitals have also now instituted rapid response teams, a relatively new concept that is saving lives.