Haddon’s matrix is an incident analysis and prevention tool composed of two dimensions: rows equating to incident phases and columns representing the epidemiological triad of host, agent, and environment (Figure 1) (Haddon, 1980). The pre-incident and incident cells are filled with factors that have contributed to an incident or potential contributors to an anticipated incident. Mitigation controls to help prevent similar incidents from occurring are delineated in the post-incident cells. Preventive strategies are specific to the type of incident, close call, or anticipated event being addressed. The matrix provides a manageable framework to brainstorm the vulnerabilities and triggers that led to an incident or to plan preventive strategies (Runyan, 2003). Furthermore, it may be used as an adjunct for gap analysis and to support root cause analysis (RCA) processes.

The use of Haddon’s matrix in incident investigation and prevention is complemented by Haddon’s preventive countermeasures (Haddon, 1968). The general countermeasures Haddon delineates are:

These countermeasures can assist with filling in the matrix cells for specific preventive actions for a given or anticipated incident. Sample countermeasures for patient falls are listed below. 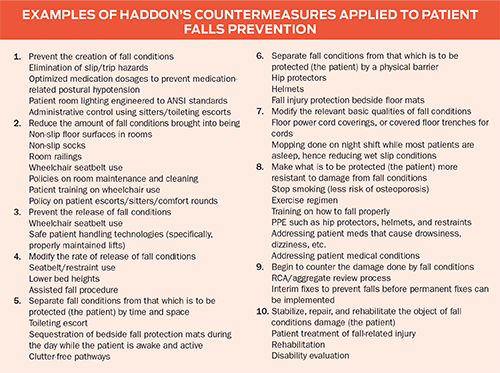 The kind of incident to which the matrix and countermeasures are applied will dictate the terminology used. Concerning patient falls, the three event phases—pre-incident, incident, and post-incident—should be recast as pre-fall, fall, and post-fall.

A literature review found no articles that examined falls incident investigations and prevention using Haddon’s matrix and countermeasures. To evaluate the matrix as a potentially useful tool in falls evaluation and prevention, the author incorporated its use into an annual aggregate review of patient falls on a medical-surgical floor (not at the author’s current institution).

A variant of the Haddon matrix (Figure 2) was created and used to augment an aggregate review of falls with the expectation that it could improve the process by enhancing organization, reducing time required to undertake the process, increasing the effectiveness of generating appropriate causal statements, and directing feasible solutions based on a hierarchy of hazard/vulnerability controls (National Institute for Occupational Safety and Health, 2015).

The Industrial Hygiene Hierarchy of Controls (HOC) was introduced to help choose the most feasible and effective methods to address hazards/vulnerabilities detected by the matrix. The HOC is a proven method used for many years in occupational health and safety, principally in the industrial setting. Although used here for an aggregate review of falls, the HOC could be applied to many patient safety scenarios and used with the actions and outcomes of RCAs and healthcare failure mode effects analyses (The National Institute for Occupational Safety and Health, 2015).

During its first meeting, the review team held a brainstorming session based on annual falls numbers acquired from the unit under review. The team began to brainstorm by filling in column 1 (pre-incident controls in place) using the members’ prior knowledge of controls that should be in place (entered as questions if unknown) or that were known to be actually in place for each row factor. The team also characterized the physiologic vulnerabilities of patients specific to the unit under review (patient/personal factors). That was followed by column 2 entries (incident triggers), which generally assume lapses or absence of controls listed in column 1 and reiterate patient vulnerabilities that could have contributed to falls.

This initial brainstorming session provided the foundation for the investigation. Team members were assigned tasks, including environment of care walkthroughs, staff interviews, chart reviews, policy and standard operating procedure (SOP) reviews, training folder reviews, and a more focused data scrub. By the second meeting, the team had received some investigatory results and made changes to initial entries in columns 1 and 2 of the matrix accordingly. The results allowed for shifts in investigatory focus. As the review continued, the team did less brainstorming and more fact generating, with relevant changes made to columns 1 and 2 of the matrix at each meeting. Copies of each matrix were kept as part of the record.

The review ceased after four meetings when the matrix revealed vulnerabilities under two factors that the team considered to be major contributing causes. A causal statement was then generated from the final matrix with vulnerabilities depicted in parallel: lack of a handoff tool and decreased staffing with concomitant task saturation, leading to communication breakdowns between shifts that created conditions for the occurrence of multiple falls on the service.

Once the causal statement was complete, remediation action recommendations were added to column 3 of the matrix (post-incident controls) under “communication factors” and “fatigue/scheduling/staffing factors,” with the HOC kept in mind (Figures 2 and 3). An engineering control was put in place via an electronic handoff tool that included fall-related information (communication). An administrative control was added via staff retraining (staffing). A fourth column could have been added to the matrix to show the outcome or process measure with time frame for review for each vulnerability remediation, but this was not a feature of the model used for this case report. At the time of this writing, no follow-up had been conducted to determine whether controls implemented based on the causal statement were effective.

Reviewing serial revisions to the matrix revealed an evolution from the general to the specific as data acquisition debunked certain assumptions about some systems vulnerabilities and proceeded to reveal more factual contributors, including:

The team conducted an after-action review and determined that the organization found the matrix had been useful; it helped expedite the review process and generate a causal statement, and assisted with remediation recommendations based on a controls hierarchy. Team members who had previously participated in annual aggregate reviews thought Haddon’s matrix was more effective than process improvement tools they had used in the past.

Multiple factors can be visualized in the matrix at the same time, allowing detection of vulnerabilities that cut across factors and eliminating others that may be irrelevant. For example, a causal statement implicating a communication problem as a root cause of an event may actually miss deeper causes that could be detected using the matrix, such as lack of training in communication, fatigue due to scheduling/staffing with resulting task saturation, and/or non-user-friendly communication modalities such as a poorly designed electronic handoff tool or poor computer operability. While generating the causal statement, being able to examine all factors at once in the matrix reassured the team that nothing relevant had been excluded.

Haddon’s matrix is appropriate for addressing other factors that revolve around an incident or potential incident. It can be used for pre-planning if an incident is anticipated, workups of close calls, post-incident huddles, after-action reports, post–corrective implementation evaluations, and brainstorming. Barnett et al. (2005) demonstrated the matrix’s utility in public health readiness and response and a hypothetical hospital infection control problem related to SARS. Per these two scenarios, Barnett revealed the flexibility of the matrix not only in hashing out preventive strategies but also in planning for budget allocation priorities and triaging proposed preventive strategies from most to least effective (Barnett et al., 2005).

The following were some limitations to the matrix’s use in our review: There was a tendency to overload the matrix blocks if irrelevant factors were not eliminated from the cells as the review progressed; and there was some overlap between factors, since some vulnerabilities could be placed under more than one factor heading.

Mel Bradley is currently the program manager for the Bay Pines VAMC employee occupational health service in Bay Pines, Florida. He may be contacted at brdlymel@yahoo.com.

Ganczak, M., Barss, P., Al-Marashda, A., & Al-Kuwaiti, N. (2007). Use of the Haddon matrix as a tool for assessing risk factors for sharps injury in emergency departments in the United Arab Emirates. Infection Control and Hospital Epidemiology, 28(6), 751–754.

Haddon, W. (1968). The changing approach to the epidemiology, prevention, and amelioration of trauma: The transition to approaches etiologically rather than descriptively based. American Journal of Public Health, 58, 1431–1438.

The National Institute for Occupational Safety and Health. (2015, April 21). Hierarchy of controls. Retrieved from http://www.cdc.gov/niosh/topics/hierarchy/default.html